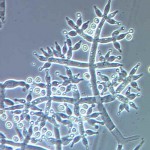 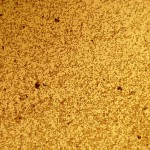 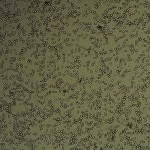 Trichoderma is a genus of fungi that is present in all soils, where they are the most prevalent culturable fungi. Many species in this genus can be characterized as opportunistic avirulent plant symbionts. This refers to the ability of several Trichoderma species to form mutualistic endophytic relationships with several plant species.

Cultures are typically fast growing at 25–30 °C, but some species of Trichoderma will grow at 45 °C. Colonies are transparent at first on media such as cornmeal dextrose agar (CMD) or white on richer media such as potato dextrose agar (PDA). Mycelium are not typically obvious on CMD, conidia typically form within one week in compact or loose tufts in shades of green or yellow or less frequently white. A yellow pigment may be secreted into the agar, especially on PDA. Some species produce a characteristic sweet or ‘coconut’ odor.

Conidiophores are highly branched and thus difficult to define or measure, loosely or compactly tufted, often formed in distinct concentric rings or borne along the scant aerial hyphae. Main branches of the conidiophores produce lateral side branches that may be paired or not, the longest branches distant from the tip and often phialides arising directly from the main axis near the tip. The branches may rebranch, with the secondary branches often paired and longest secondary branches being closest to the main axis. All primary and secondary branches arise at or near 90° with respect to the main axis. The typical Trichoderma conidiophore, with paired branches assumes a pyramidal aspect. Typically the conidiophore terminates in one or a few phialides. In some species (e.g. T. polysporum) the main branches are terminated by long, simple or branched, hooked, straight or sinuous, septate, thin-walled, sterile or terminally fertile elongations. The main axis may be the same width as the base of the phialide or it may be much wider.

Phialides are typically enlarged in the middle but may be cylindrical or nearly subglobose. Phialides may be held in whorls, at an angle of 90° with respect to other members of the whorl, or they may be variously penicillate (gliocladium-like). Phialides may be densely clustered on wide main axis (e.g. T. polysporum, T. hamatum) or they may be solitary (e.g. T. longibrachiatum).

Conidia typically appear dry but in some species they may be held in drops of clear green or yellow liquid (e.g. T. virens, T. flavofuscum). Conidia of most species are ellipsoidal, 3–5 x 2–4 µm (L/W = > 1.3); globose conidia (L/W < 1.3) are rare. Conidia are typically smooth but tuberculate to finely warted conidia are known in a few species. Synanamorphs are formed by some species that also have typical Trichoderma pustules. Synanamorphs are recognized by their solitary conidiophores that are verticillately branched and that bear conidia in a drop of clear green liquid at the tip of each phialide. Chlamydospores may be produced by all species, but not all species produce chlamydospores on CMD at 20 °C within 10 days. Chlamydospores are typically unicellular subglobose and terminate short hyphae; they may also be formed within hyphal cells. Chlamydospores of some species are multicellular (e.g. T. stromaticum). Several strains of Trichoderma have been developed as biocontrol agents against fungal diseases of plants. The various mechanisms include antibiosis, parasitism, inducing host-plant resistance, and competition. Most biocontrol agents are from the species T. harzianum, T. viride and T. hamatum. The biocontrol agent generally grows in its natural habitat on the root surface, and so affects root disease in particular, but can also be effective against foliar diseases. Trichoderma viride is a fungus and a biofungicide. It is used for seed and soil treatment for suppression of various diseases caused by fungal pathogens. It is also a pathogen in its own right, causing green mould rot of onion. T. viride is a mold which produces spores asexually, by mitosis. It is the anamorph of Hypocrea rufa, its teleomorph, which is the sexual reproductive stage of the fungus and produces a typical fungal fruiting body. The mycelium of T. viride can produce a variety of enzymes, including cellulases and chitinases which can degrade cellulose and chitin respectively. The mould can grow directly on wood, which is mostly composed of cellulose, and on fungi, the cell walls of which are mainly composed of chitin. It parasitizes the mycelia and fruiting bodies of other fungi, including cultivated mushrooms, and it has been called the "green mould disease of mushrooms". The affected mushrooms are distorted and unattractive in appearance and the crop is reduced. The fungicidal activity makes T. viride useful as a biological control against plant pathogenic fungi. It has been shown to provide protection against such pathogens as Rhizoctonia, Pythium and even Armillaria. It is found naturally in soil and is effective as a seed dressing in the control of seed and soil-borne diseases including Rhizoctonia solani, Macrophomina phaseolina and Fusarium species. When it is applied at the same time as the seed, it colonizes the seed surface and kills not only the pathogens present on the cuticle, but also provides protection against soil-borne pathogens. Trichoderma koningii is a pathogen (infecting sweet potato) and an antagonist of fungi and also has a negative effect on certain nematodes. It is being used as a biological fungicide. Trichoderma harzianum is a fungus that is also used as a fungicide. It is used for foliar application, seed treatment and soil treatment for suppression of various disease causing fungal pathogens. Commercial biotechnological products such as 3Tac have been useful for treatment of Botrytis, Fusarium and Penicillium sp. Trichoderma spp. are fungi that are present in nearly all soils. In soil, they frequently are the most prevalent culturable fungi. They also exist in many other diverse habitats. Trichoderma readily colonizes plant roots and some strains are rhizosphere competent i.e. able to grow on roots as they develop. Trichoderma spp. also attack, parasitize and otherwise gain nutrition from other fungi. They have evolved numerous mechanisms for both attack of other fungi and for enhancing plant and root growth. Different strains of Trichoderma control almost every pathogenic fungus for which control has been sought. However, most Trichoderma strains are more efficient for control of some pathogens than others, and may be largely ineffective against some fungi.