Skip to content
Home » Sustainable Agriculture » The Battle of the Lurgi

The Battle of the Lurgi 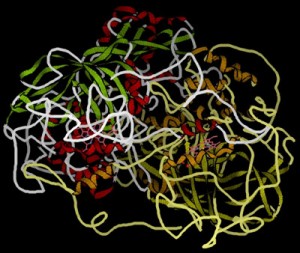 There’s no denying the considerable contribution vaccines and anti-biotics make to animal and human health. But wouldn’t it be even better if we did not need to use them so much, if we could avoid the conditions that force us to use them.

Think for a minute: How successful have vaccines been in preventing colds and flu’s in humans? How many times can we rely on anti-biotics to bring us right? How often have we heard the medics mourn that we need to modify a vaccine because Virus A, which had become Virus C, has now become Virus E? How often have we heard them lament that viruses have become immune to the present strain of anti-biotics?

Should we not be giving more attention to the causes of the disturbances to metabolic mechanisms that leave cells vulnerable to virus attack?

The thing about viruses is that that they do not have a life of their own: they live and reproduce only in a living organism. A healthy cell is a like an automatic door: it shuts out viruses. But if the human or animal metabolism is upset in some way, the disturbance can cause the transformation of the cell’s nucleo-protein into a virus molecule. In other words, the cell’s automatic door develops a fault and no longer shuts properly – and a virus can sneak in.

However, numerous scientific studies have demonstrated and revealed that an enzyme, catalase offers significant protection against viruses and bacteria, and, thus, against the diseases they carry.

The catalase enzyme originates in the soil, and, like so many things in nature, its presence in human and animal systems in sufficient quantities to effectively fight off bacteria, viruses and illnesses depends on the health of the environment in which those animals and humans live.

As we know full well, the health of what’s on top of the ground is almost entirely dependent on what’s below the ground. Remember the axioms: “the soil makes the grass” and “the soil makes the animal”. If the soil is in balance, it is healthy. And if the soil is healthy, there’s a far higher chance the grasses, animals and humans that live on it will be healthy as well. And, in this example, if the soil is healthy and balanced, it will generate an ample supply of catalase enzymes.

Researchers have long identified many illnesses as “diseases of poverty” because they attack animals and humans that live in unhealthy conditions and eat poorly.

Just as catalase is known to provide protection against the lurgies, so some foods are known to help combat certain illnesses in people and animals. Recognition of the role of nutrition in “protective medicine” has accelerated in recent years and is now widely adopted by the medical and veterinary worlds.

This comes as no surprise to those with an understanding of the benefits of maintaining balance in all aspects of the natural world – the very basis of nutrition lies in food, which, of course, is grown in the soil and nourished by the nutrients in the soil. The equation is simple: healthy, balanced soil = healthy, nutritious food.

Yet again for our human and animal species, it all comes back to that first weapon of defence against poor health – soil with a proper balance of nutrients.

An environment based on a healthy and well balanced soil reinforced by a strong presence of the catalase enzyme is less attractive and less hospitable to viruses, bacteria and other sundry bugs than an ailing, out-of-balance soil. And the grasses and crops produced on healthy soils are healthier and more nutritious than those that struggle to survive in sub-standard soils. The same principle applies to animals. The healthier and better balanced the soil, the healthier the animals.

Let’s strip the message down to its bare essential. Soil is the very basis of our life – in every sense of the word and from all points of view.

Always has been. Always will be.

Makes sense to look after it, doesn’t it?