Micro Organism Interaction in the Soil 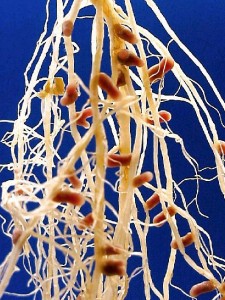 Few people – even few agronomists and soil scientists – are aware of the daily battles placed literally beneath their feet.

It’s not always nice. Indeed, it’s a sort of chemical warfare. Soil micro-organisms produce these chemicals and secrete them by metabolic processes. Some common soil bacteria, actinomycetes and fungi can produce substances that inhibit or kill other species of micro-organisms, especially those that cause plant diseases. Sometimes they do this only when the disease-causing species are present.
(Antibiotics such as penicillin, streptomycin and tetracycline are grown from the soil fungus penicillium and the actinomycete streptomyces).
And it’s quite some war. All species of soil micro-organisms have natural microbial enemies – hundreds of thousands, maybe millions, of them in every gram of soil (assuming the soil is alive and has not been sterilised by poor agricultural practices).
These microbial antagonists use their metabolic products to suppress their competitors and remove them from the soil substrate. This is a definite, selective action and, to a degree, microbial antagonists regulate the formation of microbial colonies in the soil.
They also play an important role in improving soils – what is often called the self-purification of soils. Microbial antagonists remove harmful flora and fauna from the soil, and are one of the most powerful factors governing soil fertility and the success of plants and crops.
The contents, or sap, of plant cells are also capable of suppressing the growth bacteria and fungi. Some scientists believe that if organic substances produced by soil micro-organisms are absorbed through plant roots, they increase plants’ natural immunity against infections.
The most practical way of ensuring soil contains these beneficial organisms is to make certain it is rich in humus and to fertilise it with manure or compost. Natural iron chelates produced by rhizosphere (the area close to plant roots) bacteria also help by tying up much of the iron, making it unavailable to disease-causing microbes – starving them out, so to speak.
As well as the dozens of species of bacteria, actinomycetes and fungi living on the soil particles away from plant roots, there are other species living only on the film of sticky material secreted by the roots. These rhizosphere micro-organisms are also important to the well-being of plants.
Soil conditions change constantly in terms of both the large-scale factors, such as temperature, moisture and pH, and on a microscopic scale. Indeed, conditions can be quite different just a fraction of a centimetre away.
For example, in pH levels above 6, the nitrogen-fixing bacteria azotobacter can flourish; well aerated soil allows aerobic bacteria to grow, along with fungi and actinomycetes. But if heavy rain accumulates in a low area, air is excluded and harmful anaerobic, denitrifying bacteria are allowed to release nitrogen, while fungi actinomycetes and aerobic bacteria remaining become temporarily dormant.
Besides the nitrogen taken from the air by nitrogen-fixing bacteria and algae, other soil micro-organisms help plants by making soil nutrients available – partly by producing acids that “break out” mineral nutrients and partly by producing substances (such as amino acids, growth hormones and vitamins) that are useful to plants.
Incidentally, the ability to transform organic nitrogen into nitrogen is limited to just a few groups of micro-organisms – around 20 types of bacteria, 10 types of blue-green algae, two types of yeasts, and probably one type of actinomycete.

The most important to agriculture are the bacteria, which include both aerobic and anaerobic species. Most of them are common and live in the soil independently of plants.
The best known nitrogen-fixing micro-organism is rhizobium, a bacteria that grows in the root nodules of legumes, such as lucerne, clover, beans and peas. Neither the legumes nor the bacteria alone can fix nitrogen; they must co-operate to achieve this feat.
If soil conditions are favourable, rhizobium bacteria can survive in the soil for many years, waiting for new legumes. When farmers add things that kill soil life, they are, in fact, cheating themselves out of something like 440kg/ha of free nitrogen fertiliser.