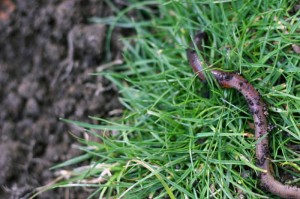 Most people misunderstand or know little about the movement of water in soils.

The average person will assume that water simply moves downwards. But, in fact, if water is applied to soil at a single point, it defies the law of gravity and moves sideways just as fast as it goes down. The result – it soaks into the soil in a spherical pattern.
Of course, rain normally falls all over the soil surface rather than on a single point, so a horizontal “front” of water will generally soak in.

However, differences in soil texture – a subsoil hardpan or even just a change from fine to coarse, for instance – produce a barrier effect to water penetration. When water encounters this change, its rate of penetration slows considerably, and, in reverse, later rise of water to supply roots will also be slowed.

The role of porous matter, such as plant residue, in absorbing water can also be important under some conditions. Organic matter (a mixture of dead, decomposed humus and the living soil organisms) that has been thoroughly incorporated into the upper layers of the soil or is partly exposed to the surface acts as a wick to increase water penetration. A compact sloughed-under mass or organics matter will also act as a barrier.

Indeed, organic matter is of crucial importance in soil – it has been described as the “constitution” of soil.

The “humus” component of organic matter is a structureless material formed through the decomposition of mostly plant residues and manures. It’s a complex chemical mixture that includes proteins, lignin (originally part of plant-cell walls), fats, carbohydrates and organic acids.

Its colloidal nature gives it great ability to hold nutrients, which leads to a number of beneficial qualities:

It stores essential plant nutrients – 95% of the nitrogen, 60% of the phosphorus, and 98% of the sulphur available to plants.
It helps make some nutrients more soluble and available to plants. It stores nutrients and releases them when plants need them most. Acids in humus also dissolve soil minerals slowly and release nutrients.
It contains substances that stimulate plant growth and improve both crop quality and resistance to pests and diseases.
Its spongy nature allows it to absorb and hold large quantities of water.
It contributes to good soil structure (tilth) by helping make the soil crumbly and porous. It also reduces wind and water erosion, and makes soil easier to work.
It acts as a protective buffer to plants against high salt levels, toxic chemicals and drastic changes in pH.
It’s a source of food for beneficial soil organisms, especially during fresh organic matter’s pre-humus form.
Now to the living part of the soil.

Fertile soil teems with a variety of plant and animal life, most of it microscopic and therefore little known and little appreciated by most people. But these life-forms – which include bacteria, actinomycetes, fungi, algae, protozoa, nematodes, worms and insects – are a valuable “work force” that performs a multitude of chemical transformations as well as many other services.

Bacteria, actinomycetes and fungi are the most important:

Bacteria are single-celled organisms that can live in conditions with or without oxygen, but usually not in very acid soils. Soil bacteria help decompose organic matter to form humus, convert inorganic chemicals into useful plant nutrients, break down manmade toxic chemicals (herbicides and pesticides), and trap nitrogen from the air for later use by plants.
Actinomycetes are thread-like organisms, somewhere between bacteria and fungi, that require aerobic, neutral or slightly alkaline soils. They help produce humus.
Fungi, or moulds, are thread-like, mainly aerobic, and able to tolerate fairly acid conditions. Many of them help produce humus, and one particular group is especially because it lives inside plant roots helping absorb nutrients (especially phosphorus and nitrogen), secrete growth-promoting hormones and protect roots from disease.
Soil organisms “tie up” nutrients from minerals and organic matter temporarily in their bodies and counteract the loss of soils nutrients through leaching into groundwater. When the organisms die, the nutrients become available to plants, which are fed slowly over the growing season.
Soil organisms, along with humus, produce the “glue” – a sticky carbohydrate – that holds soil particles together and forms a loose, crumbly, porous soil.

Humus and soil life work together as a team to perform these valuable services – and, best of all, they work for nothing if given the chance. So why would anyone want to dump toxic materials on the land that will kill or inhibit this volunteer army?