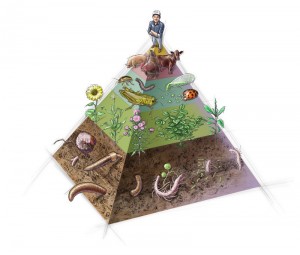 The food chain is often described as a pyramid – or, more precisely, a “biotic pyramid”.

Soil forms the base of the pyramid, plants are on the lower level, then plant-eating animals (herbivores), with animal-eating animals (carnivores) on the top level. If humans are included, they are placed at the very top.

The pyramid design shows very clearly that there are many species and individuals at the lower levels and fewer at the higher levels of the food chain. The reason is that from one level to the next (when one organism eats or is fed by another), there is a certain amount of energy loss or wastage (food is stored energy). When we move from the plant realm to the animal realm, we are moving to the top of the biotic pyramid.

So, what affects animal (and human) health and nutrition? Are animals really that much different from plants? If you raise animals, or your family just wants to be healthy, you need to know something about animal and human nutrition.

We need to remember that sickness is not normal, either in humans or animals. Robust health is the normal condition or human and animal bodies. Certainly, some people are ill so much of the time they’ve probably forgotten what it feels like to be well. And farmers generally expect to have a certain number of sick and young animals that die.

Nor does it pay to be sick, whether you’re human or animal. Doctors and veterinarians, drugs, and medicines do not come cheap. Just think how much money and time could be saved if you or your animals were never sick.

Unfortunately, medical and veterinary training institutes do not spend a lot of time teaching prospective doctors and vets how to keep their patients healthy by preventing disease. Rather it’s ambulance-at-the-bottom-of-the-cliff logic – diagnose a disease, give it a complicated name, and prescribe a drug or poison to fight it, often by attacking the symptoms rather than the cause.

We often hear the phrase, “you are what you eat”, and we know that animals get their food, which later becomes their body substances, from eating plants, or animals that eat plants. And, where do plants grow? In the soil, of course.

William Albrecht summed up the role and importance of the soil: “We know that the soil grows grass; that the grass feeds our livestock; and that these animals, in turn as meats, are our choice protein foods. We can, therefore, connect our soil with our health via nutrition. Since only the soil fertility, or that part of the soil made up of the elements essential for life, enters into the nutrition by which we are fed, we may well speak of animal health as premised on soil fertility.”

Remember that plants take simple chemical substances (carbon dioxide, water and minerals) and combine them into more complex substances (carbohydrates, fats and proteins), trapping and storing the sun’s energy in the form of chemical energy.

Animals, however, do the reverse. Their body and cell functions break down the complex food molecules, releasing some of the stored energy; but then, as plants do, animals combine the simpler “building blocks” obtained from food substances into more complex substances that make up the cells and tissues of an animals’ body.

Remember, too, that plants can also break down complex food molecules into building blocks and energy. Many of the basic molecules (amino acids, ATP, and vitamins) involved in animals are the same or very similar to those found in plants. But many are different because plants do not have muscles, nerves, blood, etc.

Just as the wrong nutrients from the soil can disturb plant metabolism and cause ill health, animals can become sick from not getting the right nutrients in the food they eat, and the consequent lack of vitamins and minerals.

Other factors can contribute to animal health problems, but essentially sickness comes down to the body succumbing to one or more stresses – such as poor ventilation, contaminated water, bad weather, infectious diseases, parasites, improper handling and injury, noise, and other frightening conditions, lack of exercise, poor nutrition.

Most of these stresses can be reduced by good farming practices and animal management, with the payoff coming in higher production and healthy offspring.

It all starts in the soil. The healthier the soil, the better the food for animals; and well-nourished animals are better equipped to resist or tolerate stresses such as diseases, parasites, and bad weather.